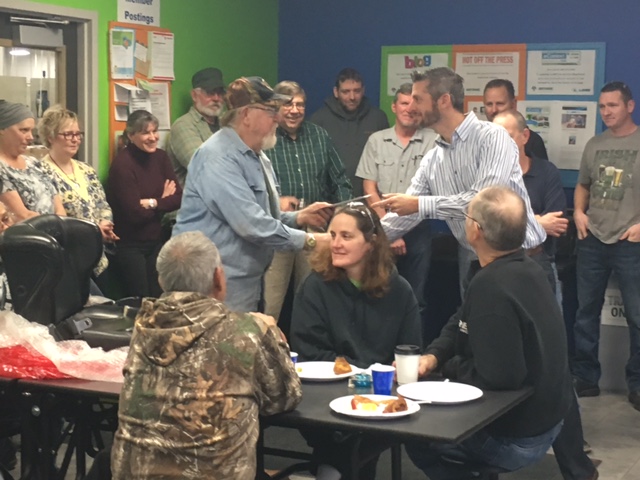 December 23rd, 2017 - According to the most recent available data from the Bureau of Labor Statistics, the average worker today stays at each of his or her jobs for 4.4 years. Northwire TEAM member Jerry Meyers has exceeded that average by ten times!

Jerry was part of Northwire’s original TEAM - where Together Everyone Achieves More. This group of cable experts whose commitment to working hard, providing the highest quality cable solutions, and the philosophy of treating every wire and cable customer as if they were NWI’s one and only, has established NWI’s customer-centric culture along with the growth and success that has secured Northwire’s worldwide presence and reputation as a leader in custom cable assemblies.

The numerous chapters of Jerry’s work within the cable and wire industry started when he came in to meet with Ormund Kravik, NWI’s founder. Hired that same day, Jerry’s positive can-do attitude served the company well in multiple roles. Initially working as a Cabler 1 Operator he moved to an Operator on Extruder 1, an Operator on Extruder 2, and then wrapped up his NWI career as a Material Handler. In this position, Jerry was responsible for moving essential cable materials around the floor and ensuring that the operators had what was needed to manufacture cable for customers.

Committed, dependable, and trustworthy, Jerry was on call during the early days and would come in on the weekends as needed to unload the trucks and help inventory cable materials as well as make special runs in the company vehicle to deliver cable products when requested by Mr. Kravik.

Regarded as a true inspiration, creator, and valued TEAM member, Jerry was celebrated for his service and was acknowledged at a breakfast brunch where several members from both Northwire and the community highlighted Jerry’s contributions and respected character.

When asked what’s next, Jerry noted that his retirement plans include restoring cars, a true passion and love of his.  His first project? A 1967 Mustang!

Thank you, Jerry. Northwire extends our sincere appreciation and best wishes to you!